Fourmillion have already sailed on the M/S Viking Grace 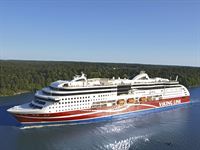 The cruise ship M/S Viking Grace has now transported four million passengers.  The ceremonial passenger who broke the four million mark was celebrated on board the vessel on Friday, May 13. The M/S Viking Grace, which went into service in January 2013, is still the only passenger ship on the Baltic Sea that runs on liquefied natural gas. Among the features on the vessel, which sails the Turku–Stockholm route, are top-quality restaurants, recently modernized spa facilities and a unique offering in its Victoria’s Secret Beauty & Accessories shop.The four-million passenger milestone was