Wihlborgs has signed an agreement with the business adviser and business partner Aspia for 1,100 square metres in the seaside building Skrovet 3 in Dockan. Occupancy will take place at the end of 2022 and the lease is for five years.Aspia offers services including accounting, bookkeeping, HR and tax consultancy. For the past three years, Aspia has worked from two different locations in Malmö, but is now moving to the newly renovated shared premises in Dockan. “For us, it is important to find premises that promote collaboration and social interaction. We also required a location in

Wihlborgs has signed an agreement to acquire the Österport 7 property with a lettable area of 11,000 square metres in Drottningtorget in Malmö.The seller is SPP Fastigheter AB (publ) and transfer is scheduled for 1 June 2022. The property is approximately 500 metres from Malmö Central Station and consists of an office building of seven to eight storeys, with a large garage shared with the neighbouring property. The tenant, Sweco Sverige AB, currently has the entire property at its disposal. The underlying property value is SEK 390 million and the acquisition was completed using a corporate

Wihlborgs lets 5,900 m² at a logistics property in Malmö

Wihlborgs has signed an agreement with a logistics customer for 5,900 m² at Benkammen 16 in Fosie in eastern Malmö, an in-demand area with a low vacancy rate. Occupancy is scheduled for June 2022.During the short vacancy following the move of the existing tenant in mid-April will focus on redevelopment for the new tenant, YunExpress Nordic AB. YunExpress Nordic AB works with last-mile solutions for e-commerce. The company is part of Migyston Logistics Services, which is relocating its operations from Halmstad to Malmö. The Benkammen 16 property contains future project opportunities of

On 1 September, SportAdmin, which digitalises and automates administration for sports associations, is moving to 600 square metres at Sparven 15 on Drottninggatan in Malmö.SportAdmin has 1,500 associations, including half of all the Allsvenskan football teams (Sweden’s top tier football teams), as customers. The company has increased its turnover by an average of 50 per cent each year since 2016, doubled its personnel in three and a half years, and for three years in a row has been recognised with Dagens Industri’s Gazelle company award. The idea behind the company – to digitalise and

Avensia is currently a tenant of Wihlborgs in both Lund and Helsingborg. And now, the IT company is opening an office in Malmö City in the former premises of Massive Entertainment at Sparven 15 on Drottninggatan. The lease is for some 700 square metres with occupancy scheduled for 1 September 2022.Avensia, which is an expert company in modern retail, with its head office in Wihlborgs’ Posthornet 1 property in central Lund, has grown rapidly in the past few years. The company is now located in such locations as Helsingborg, Stockholm, Oslo and London. The objective with establishing an 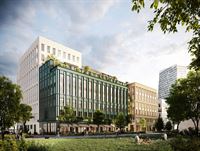 Wihlborgs has signed an agreement with Trygg-Hansa for 12,000 m² and a lease term of 15 years in the triple certified Kvartetten (Pulpeten 5) in Hyllie.The relocation means that Trygg-Hansa is co-locating five regional offices with a total of 1,000 employees. The 12,000 m² lease is one of the biggest office leases in Sweden in the past year. Kvartetten, Wihlborgs’ third office building in Hyllie, which is scheduled for completion in the beginning of 2023, is certified in accordance with Zero CO\2\, WELL and SGBC Miljöbyggnad Guld. The Zero CO\2 \certification aims to achieve a net

Wihlborgs has signed leases with new and existing customers in Slagthuset 1 and Erik Menved 37, close to Malmö Central Station.Veg of Lund and Eolus Vind will be new tenants in Slagthuset 1, leasing 270 and 550 m², respectively. Veg of Lund was founded as recently as 2021 and develops food based on potatoes and rapeseed oil. The existing customer Pulsen Integration AB, an IT company that is part of the Pulsen Group, is expanding its lease to 480 m². Slagthuset has been renovated over the past few years and is a part of Nyhamnen, which is undergoing a transformation from an old

Wihlborgs signs agreement with Mindpark, which is expanding in Hyllie

Wihlborgs is currently building the Kvartetten office building in Hyllie, where tomorrow’s workplaces are being created with a focus on sustainability – for the environment and for people. Wihlborgs has now signed an agreement with the co-working company Mindpark which will elevate the experience and service at Kvartetten. Mindpark moves in at the beginning of 2023.Mindpark is a successful, award-winning co-working company with locations at sites including Wihlborgs’ premises in the historic Tretorn factory in Helsingborg and at Slagthuset by Malmö Central Station as well as in Lund and

Wihlborgs has signed an agreement with Beckhoff Automation AB for a new 1,800 m² office building for Beckhoff’s Swedish headquarters in Fosie, Malmö.Beckhoff develops universal and open control and automation solutions that are used in a wide variety of applications ranging from CNC machine tools to intelligent building automation systems. Beckhoff’s Swedish headquarters is already located in Malmö, but the company is set to move in to an entirely new and modern building at Hindbygården 7 adjacent to Inre Ringvägen and Ystadvägen in summer 2022. Beckhoff will lease the entire property in

Wihlborgs to begin construction of Kvartetten in Hyllie 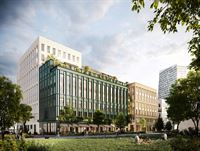 Wihlborgs is set to start construction on the next office project in Hyllie – Kvartetten (Pulpeten 5). 16,000 m² of modern office premises with a focus on people and the environment will be created a stone’s throw away from Hyllie station.Kvartetten will be an inspiring block with several facades, all with different identities and designs based on the Öresund region. The four facades will bring to mind the fertile farmland, the greenery of Malmö’s parks, Höganäs Keramik and the limestone of Limhamn. Everything that modern companies could wish for will be found in Kvartetten. Large,

Today Wihlborgs signed an agreement to sell 21 properties in Malmö encompassing a total of 124,000 m².The properties are in Arlöv, Bulltofta and the port in Malmö, encompassing 24,000 m² of office space and 100,000 m² of logistics and production premises. The sale is through a corporate wrapper with an underlying property value of SEK 1,430 million. As of end June the book value of the properties amounted to SEK 1,079 million. The rental value is SEK 110 million, average remaining lease term is 31 months and the properties are currently 92 percent let. The buyers are real estate funds

ACNR Cyber Technology has signed a lease with Wihlborgs for 3,700 m² in Malmö.ACNR is an IT company focused on both software and hardware. The company was founded in Stockholm and is now also establishing operations in Malmö. On 1 December, ACNR will move into the premises, which includes 3,700 m² of offices, storage and space for testing at the Olsgård 8 property in Fosie. “ACNR is an attractive growth company with exciting future prospects. We look forward to helping their establishment and future development in Malmö by offering premises that fit their needs, both now and in the

Wihlborgs has signed a lease with Bevego for a new 1,200 m² production facility in Fosie, Malmö.Bevego is a wholesale and trading company in metal sheets and coils, ventilation, and technical insulation. Since 2007, the company has leased a 4,000 m² store and warehouse premises at the Dubbelknappen 23 property in Fosie. Wihlborgs is now building a 1,200 m² production facility at the same property that Bevego is leasing for a ten-year period. The lease for the existing premises is also being extended by an additional ten years. The investment for the build is SEK 23 million and the yield is

Wihlborgs to let new build at Medeon in Malmö to Galenica

Wihlborgs has signed an agreement with Galenica for 2,640 m² at the property under construction at Medeon Science Park in Malmö, Sweden, with occupancy scheduled for 1 October 2020.In addition to these new areas, Galenica has also signed an agreement to retain the majority of the laboratory premises it currently leases in the existing building. Thereafter, Galenica will lease a total of 4,000 m² of office space and laboratory premises as well as 700 m² of storage. Galenica started at Medeon in 1999, with its current CEO Ronnie Wallin as one of the founders, and today has 70 employees.

Wihlborgs has signed an agreement with Veho Bil Sverige AB for the construction of a vehicle centre at Stora Bernstorp on the outskirts of Malmö.Veho Bil is the Nordic region’s largest Mercedes-Benz dealer. The facility to be built by Wihlborgs will be Veho’s first in the Skåne region and will be used for sales and service of trucks and buses. In 2018, Wihlborgs completed a similar facility for the German firm MAN in the same area. The facility encompasses 2,950 m² and will be located on the Sunnanå 12:54 property. Veho Bil will lease the premises together with a 14,600 m² site under a

In the spring, Wihlborgs’ Dungen office building was ready for occupancy. The building has now been nominated for the Urban Design Prize in Malmö, which will be awarded on 6 September.Dungen is a green building in several regards. The building has received SGBC Gold certification and the spacious atrium at the heart of the building provides a meeting place where large trees create a vibrant and green environment. Inspiration for planting the trees came from the verdant garden of the farm previously located on the site. The building has a glass facade facing Arenagatan with views into the

Wihlborgs has signed a lease with a major tenant for 6,300 m² in the Origo (Bure 2) office building, which is currently under construction in Hyllie, Malmö. This means that all office space in the building has now been let.The tenant is an international company, and has signed a five-year lease with occupancy in December 2019. Wihlborgs already has a lease signed with Knauf Danogips for 270 m². “Origo is an inspiring project with a focus on high quality work environments, multiple balconies on each floor, good service and a direct entrance from the railway platforms. The building is a

Wihlborgs has won a tender for a transportation facility for Region Skåne. The lease that has just been signed means that Wihlborgs will build a facility of 2,300 m² with adjacent parking lots and logistics premises.The lease is for premises for Skånetransport, which is responsible for Region Skåne’s collected fleet of 780 vehicles and provides transportation between the organisation’s different entities in Skåne. The new facilities have a location that will reduce the transportation’s environmental impact through its proximity to Malmö and Lund as well as the major road network with access

Last summer, Malmö University signed an agreement with Wihlborgs for 9,000 m² for police training in Malmö. Now the university has signed a ten-year agreement for an additional 1,700 m², primarily lecture halls.Police training at Malmö University started in January, and in August the training is moving to Kranen 2 in Dockan. Wihlborgs is currently conducting a substantial redevelopment of this property to meet the need for space for research facilities, firearms ranges, training environments and a garage for police vehicles, among others. These premises will enter operation in July 2019 and

Wihlborgs is extending Medeon Science Park in Malmö with a further 4,000 m² to make room for more life sciences companies. A symbolic construction start is slated for tomorrow, during which a time capsule will be embedded in the foundation of the new build.Medeon is a research park specifically for organisations in life sciences: drug development, medical technology, biotechnology and other health-related areas. The companies at Medeon can leverage the close collaboration with the healthcare sector and academia, incubator and networking functions as well as shared services such as reception,

Wihlborgs signs lease with the City of Malmö for 8,200 m²

The City of Malmö has signed a ten-year lease with Wihlborgs for 8,200 m² in central Malmö for the medical, health and social care administration (HVO).The HVO will move in to the Elefanten 40 property at the corner of Storgatan and Södra Förstadsgatan when Swedish Customs moves to Hyllie in the second quarter of 2019, opening up 8,800 m² of office space. After Swedish Customs moves out, the premises will be renovated and the City of Malmö can move in on 1 November 2019. “The City of Malmö is one of our most important tenants in Malmö and we maintain a continuous dialogue with them about